The ooey gooey mac-n-cheese and sandwiches are made with top quality ingredients using breads and cheeses from local artisan vendors as well as local produce. But what really struck me was the fact that they donate 5 percent of every sale to local charitable organizations. So we enjoy fresh comfort food while we support the community where we live. What a concept! That phrase is on one of many signs that hang inside the restaurant. High table tops of shellacked plywood have metal legs and the backless metal stools are bright yellow. The concept is simple. You walk up to the counter to order and choose from the delectable combinations they have listed on the menu or you can start with your protein, your choice of cheese, etc.

Everything is made fresh in front of you. Then I watched them stuff them to the top. The kids and I decided to order two types of macaroni and cheese, and two sandwiches. I apologize now to anyone who witnessed our vulture-like behavior. We chose the Southwest and BLT macs.

With chorizo, chipotle peppers, cilantro, jack cheese and queso menonita the Southwest was a crowd pleaser. The milder BLT with bacon, baby leeks, oven roasted tomatoes and two kinds of cheese was also a great option.


But is there really ever a bad option with mac-n-cheese? The Dagwood sandwich with balsamic onion jam, tomato and ham on sourdough is a favorite, we were told, and we loved it as well. 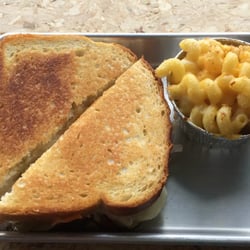 The Blue Buffalo, filled with chicken, buffalo aioli, blue cheese and baby kale was another house favorite. We must admit that we have a soft spot for Registry Bistro and that it is perhaps our favorite fine dining restaurant in the area. It is always comforting to see a clearly-marked item on the menu as that removes any ambiguity and confusion.

The restaurant prides itself by using locally-sourced seasonal vegetables and these spontaneous dishes are often creative mixtures of what is currently available. The menu is generally heavy on the meats, though we have found the servers to be very knowledgeable about possible modifications that can be made and so there are generally choices between several appetizers and salads. Finally, every time we have gone, they have had a vegan sorbet, often blackberry cabernet, available for dessert.

We don't ever expect that there will be vegan dessert options when we dine out and so this is always a nice treat! Finally, they modified a dish that originally had gnocchi and replaced that with lentils with a golden cauliflower puree, along with mushrooms and fiddlehead ferns. We love how they have refurbished the ground floor of the old Secor Hotel and created an atmosphere that is contemporary, with a space laden with rotating single-artist art shows housed by River House Arts.

The cocktail menu has unique takes on classic cocktails Rachel recommends the Retro-Fashioned! Also, we feel like the prices are quite reasonable for the dining experience that you get. Check it out!

Macs N' Melts has several vegan options. Although this place celebrates cheese with signs such as "the secret ingredient is always cheese," they carry Daiya. Although they do make a vegan cheese sauce for macaroni, they did not have it the night we went. In fact, one of the managers said that a lot of vegans have been coming in for donuts and ordering other items.

He suggested calling ahead to see if they have the vegan cheese sauce for macaroni.


They were still able to make sandwiches. We ordered The Farmer's Market sandwich, substituting daiya cheese for traditional cheeses. The sandwich came on multigrain bread and had oven-roasted tomatoes, English cucumbers, spinach and roasted red peppers. We also made a build-your-own sandwich with Daiya, Chipotle peppers, spinach, tomatoes and cauliflower.

Both sandwiches were grilled and both were tasty. Please note that the multigrain is the only vegan bread currently on the menu. Although Macs N' Melts looks like a national chain, it is a local business with just this one location in Perrysburg the Westgate one apparently closed as of December We like that they have several vegan options—and that on their menu board it states to ask about vegan options—and we look forward to trying their vegan macaroni and cheese soon.

When we do, we'll make sure to post an update.

One of our goals at Vegan Toledo is to encourage and support restaurants that are doing a good job, as well as to nudge those that could do better. Until now, we have only published reviews that are based on our own firsthand experience. The bulk of questions we have been getting lately are about catering and special events for vegans in the area, from vegan wedding cakes to cool venues to host vegans with their omni friends and family. In order to help these folks as best we can since we've only bought one vegan wedding cake and don't have huge parties all the time , we are reaching out to our community to learn more about your catering recommendations in the Toledo area.

Please consider filling out this brief survey about any recent catering experiences you've had.

If you have a catering company, please encourage your customers to fill one out. Thanks for your help! Within the last year, Toledo finally got one. Bowling Green, despite its large number of college students, doesn't have one. But Napoleon does! We ordered two soups, one tomato-based and another that was a vegetable mix that had a nice coriander seasoning. For our next course, we had roasted-celery hummus as well as a chickpea salad, both that were quite good.

There is a chip bar that includes bags of chips that are available for purchase, so it was nice to try out a variety of pitas with the hummus. For the main course, we had two burgers, one a broccoli burger and another one made of black beans. Both were served on freshly made bread and both were delicious.

We both agreed that the broccoli burger is likely the best vegan burger we've had in NW Ohio. It had a rich flavor that had a slight broccoli taste as well as rich nuttiness. For dessert, there was gluten-free vegan brownie that was moist and very delicious!